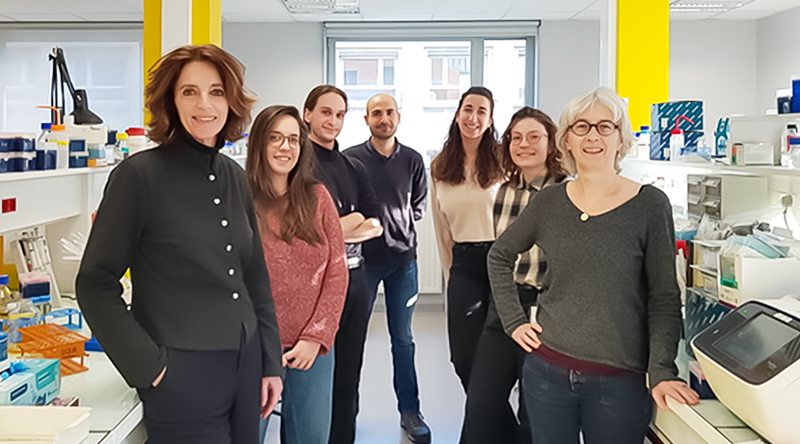 Eukaryotic chromosomes are non-randomly organized in the 3D space of the nucleus and their spatial organization is involved in fundamental genome functions, such as repair of DNA damage and transcription. Further, genome integrity and gene expression are constantly challenged by transposable elements (TEs) representing respectively 3% to 50% of yeast and human genomes.

Given the very high degree of conservation of DNA-repair machineries, TE mobilization and impact on genomes and mechanisms of chromatin organization between yeast and humans, our long-term goal is to take advantage from our understanding in yeast to determine if similar mechanisms operate in human cells. In this respect, opening up to translational research with the teams at St Louis Hospital is a constant concern.

Transposable elements (TEs) are dynamic genomic units able to move within the genome and are present in all domains of life. They have been shown to be a powerful force of evolution and act positively in long-term adaptation to different environments. However, TEs can also be deleterious in the short-term. Their integration into the host genome can inactivate/deregulate gene expression or induce large chromosomal rearrangements. In humans, more than hundred heritable diseases or cancers have been assigned to de novo TE insertions. To understand how TEs contribute to genome stability, expression and evolution, we are deciphering the molecular bases of their integration site selection.  To this purpose, we are combining molecular genetic tools and genome-wide approaches to characterize the multiple factors that contribute to the integration site preferences of the yeast Ty1 LTR-retrotransposon for Pol III-transcribed genes. 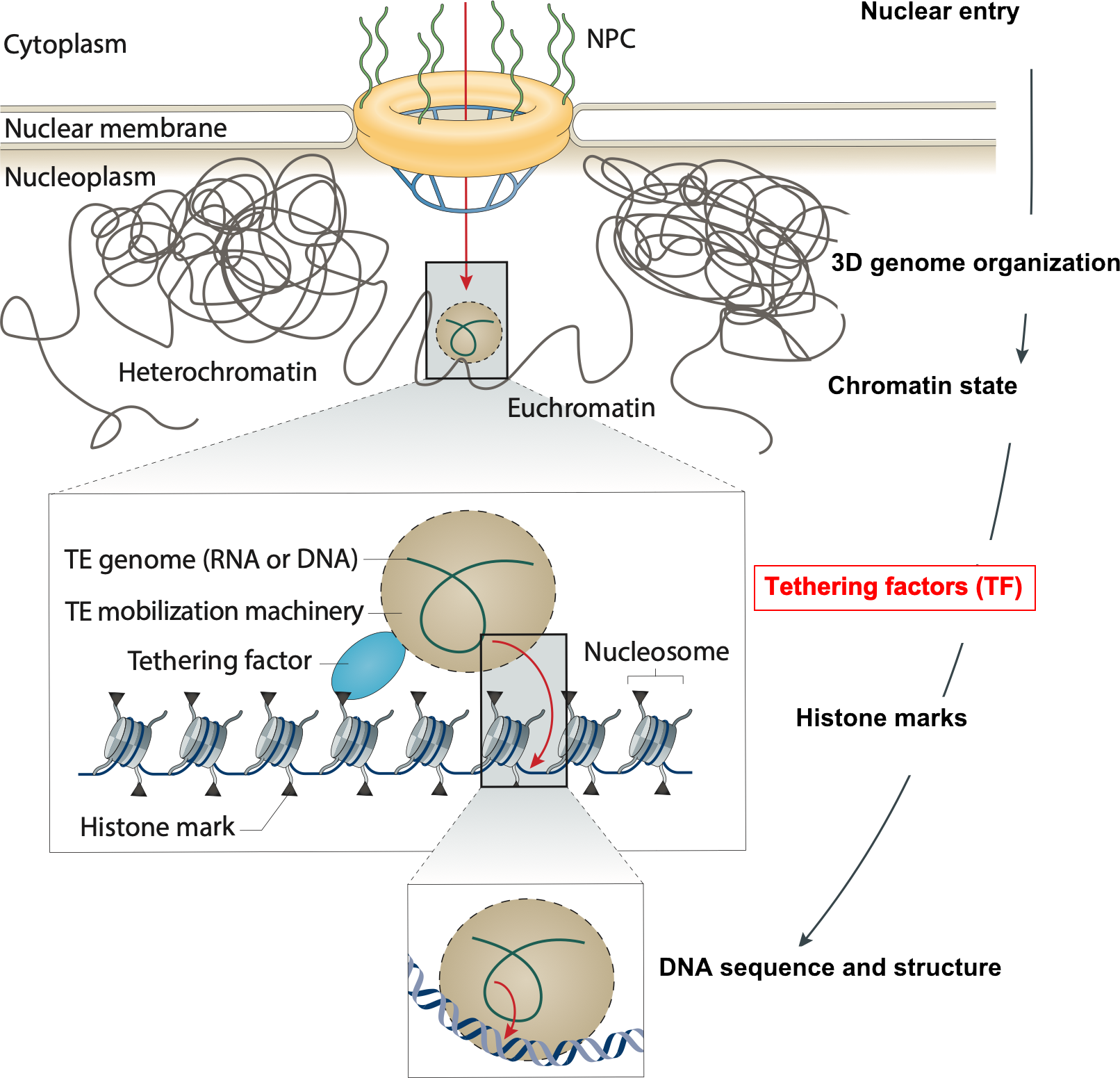 The different factors that can influence integration site selection, from nuclear entry to chromosomal DNA. An interaction between the retroelement integrase and DNA or chromatin associated proteins is determinant to tether the complex of integration at the site of integration. After Sultana, Zamborlini, Cristofari & Lesage, Nature Reviews in Genetics, 2017.

Genomes are constantly under endogenous or exogenous genotoxic threats. Double strand breaks of chromatin are the most deleterious damages. Left unrepaired, cell will die; erroneously repaired, cell might engage to cancer. Cells have therefore evolved sophisticated and conserved mechanisms to ensure genome integrity.  Among those, chromosome mobility, at the site of damage and elsewhere, in undamaged chromosomal domains, are conserved features of threaten genomes. On the other hand, genomes are not randomly organized and chromosome organization is functionally important for faithful repair to occur. Given the importance for genome integrity and cell maintenance, we aim at understanding how 3D chromosomes are organized and what controls chromosome mobility and repair. 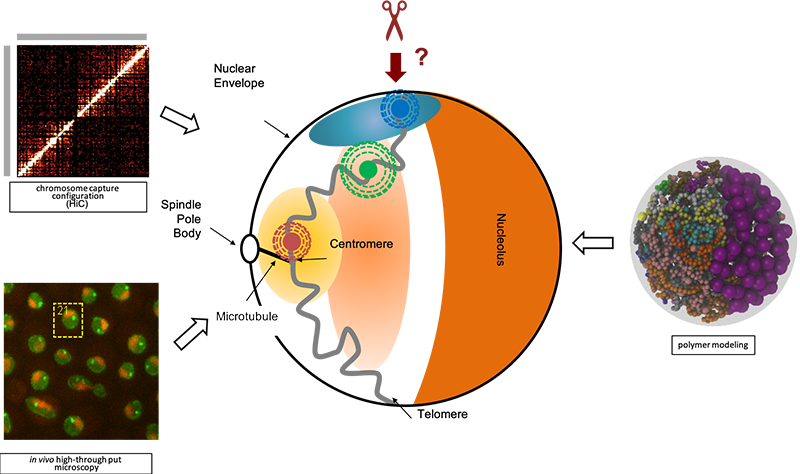 Our group has developed tools allowing for induction of double strand breaks (DSBs) at desired positions in the genome. By combining yeast genetics and genomics, cell biology in living cells together with live-video microscopy and image analyses tools, we study chromosome mobility and architecture upon DNA damage. We are interested in developing interdisciplinary aspects of our research and we regularly collaborate with physicists to feed chromosome models based on polymer physics and super resolution imaging (PALM microscopy).

The recent discoveries of our team are focused on the essential role of histone H2A phosphorylation in chromosome mobility in the context of 3D chromosome organization. The current objectives of the group are to understand how H2A phosphorylation sensitizes cells for repair, to define the contributions of other epigenetic marks and to comprehend the role of chromosome architecture in this process.

The establishment of heterochromatin is essential to repress transcription of DNA repeats and contributes to maintain genome integrity. During early embryonic development, the active DNA demethylation occurring before embryo implantation challenges heterochromatin formation. In this context, alternative mechanisms are established to form the heterochromatin compartment.

Conventional organization of a mammalian nucleus. Different landmarks contribute to genome segregation into functional compartments. The nuclear envelope defines the edge of the nucleus. The nuclear lamina is a meshwork of proteins that interact with heterochromatic genomic regions called lamina-associated domains (LADs), only interrupted by nuclear pore complexes (NPC). The two main other landmarks: the chromocenter, composed of clustered pericentromeric heterochromatin (PCH), and the nucleolus. (right) region of the nucleus with the histone marks associated with the different compartments. LADs at the periphery are enriched in H3K9me2/3 modifications and H3K27me3 at LAD borders. Heterochromatin regions show different levels of HP1 with higher concentration at PCH. The NPC interacts with euchromatin domains. Ac, acetylation; me2/3, di or tri-methylation; DNA 5mC, DNA methylation; HP1, Heterochromatin Protein 1; LBR, Lamin B Receptor; NET, Nuclear Envelope Transmembrane protein. After   Canat , Veillet , Bonnet  &Therizols. Brief Funct Genomics,  2020.

Using mouse embryonic stem cells (mESC) as a model, our team focuses on the role of the histone variant H3.3 and its chaperone Daxx in the formation of heterochromatin at tandem and interspaced repeats.

The Ty1 LTR-retrotransposon of S. cerevisiae preferentially integrates into a 1-kb window upstream of RNA polymerase III (Pol III)-transcribed genes. Because tRNA genes are in multicopy and thus individually are non-essential, this integration pattern allows Ty1 to replicate and yet minimizes genetic damage to its host.

To understand the interplay between chromosome organization and DSB repair, we have shown